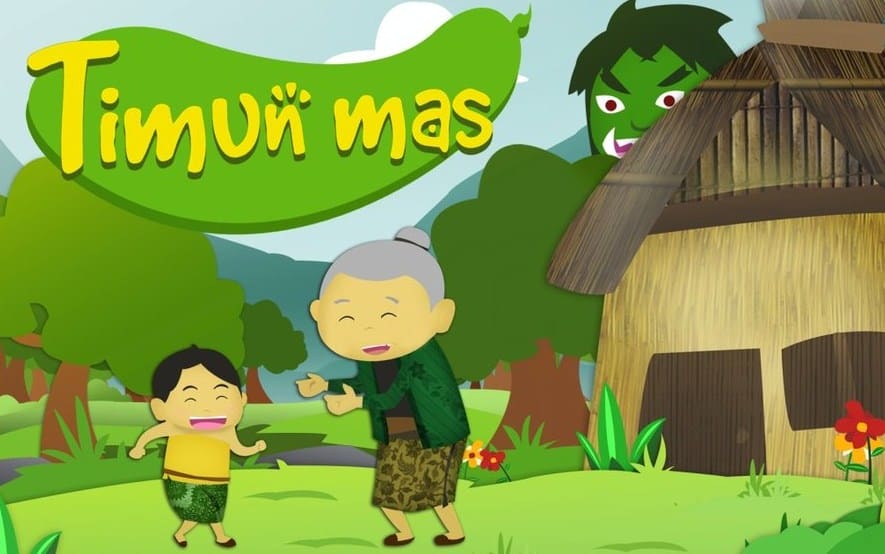 Once upon a time there’s a window who lived alone for a long time, named Madam Yani. Since the death of his husband years ago, her days was lonesome. She wanted a child who can accompany her in the rest of her life and help her to work in the field. Madam Yani always prayed without being tired in order to get a child. One day, when she was working in the field near the forest, a giant came and made her scared.

“Oh My God, who are you? Please don’t eat me!” Madam Yani shouted.

The giant replied, “Hahahaha… Hey you, the old widow! Don’t be afraid of me. I won’t eat you. You want a child, don’t you?”

“I will give you a child, but I have a request.” The giant said.

“What is your request?” Madam Yani responded.

“You have to give that child back to me when she is seventeen years old. I will eat her. Hahaha. It must be delicious.” The giant explained and laughed.

Madam Yani accepted the request. Then, the giant gave her a cucumber seed to plant and care. After two weeks, there was a big cucumber and shone like gold. She picked the cucumber and opened it carefully. She was shocked because she found a beautiful and cute baby girl inside the cucumber. She was very happy and love the baby very much. She named her Timun Mas.

Timun Mas grew well. She was diligent helping her mom. She was always cheerful and amused her mom every time she was sick and sad. She was a very kind and helpful girl. Timun Mas was 17 years old. Her mom worried if the giant came and took Timun Mas from her.

What made Madam Yani worried came true. That came the day when the giant asked Timun Mas to be eaten. He asked Madam Yani to fulfil his request 17 years ago. But, Madam Yani didn’t want to let Timun Mas go with the giant because she knew that the giant would eat Timun Mas. Madam Yani thought how to trick the giant. She got an idea to make the giant go away from her life.

“Hey, Timun Mas, Where are you going to go? Come to me. I will eat you!” The giant said.

When the giant almost got her body, Timun Mas remembered her mom’s advice. She opened the first sack, which were the seeds of cucumber. She threw it and magically the forest was full of cucumber tree. The giant ate all of the cucumbers and he became more powerful. He chased Timun Mas again. Then, Timun Mas threw the needles and it turned into sharp bamboo trees and blocked the giant’s steps.

Timun mas was tired to run. She was about to give up. But, she threw the third sack which contained some salt. After that, the forest turned into an ocean, she was desperate and she threw the last sack which was shrimp paste. Then, it turned into a hot mud pond and the giant was dead. He was sunk into it. Timun Mas was relieved that the giant was dead. She went back to her mom’s hut and cried. She was grateful that she was alive and could meet her mom again.