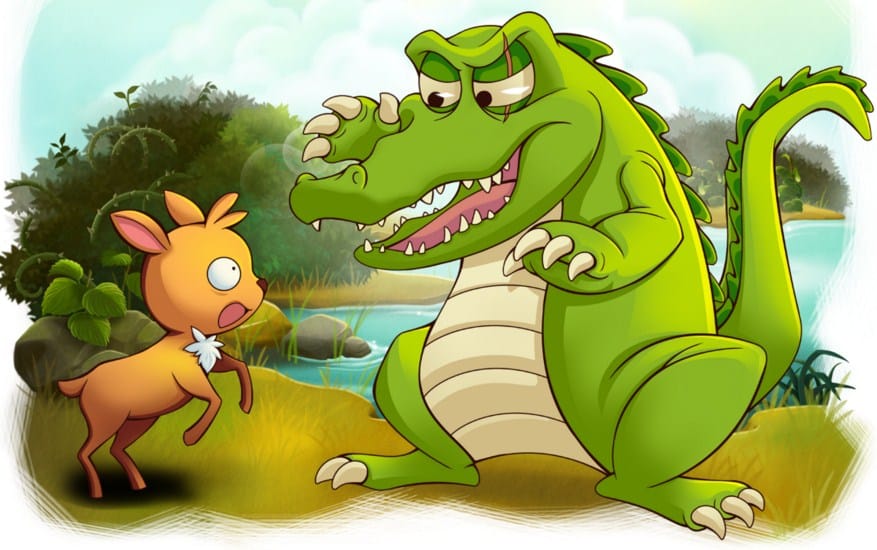 One day, a mouse deer, which was well-known as smart animal, was walking on the edge of the forest. It just looked for the fresh air and saw the bright sun. It wanted to lay under the sun, near the river. After it did sunbathing, it felt hungry. It imagined if there was its favaorite food i.e. cucumber. It looked around the river and it found a cucumber field. That was Mr. Farmer’s field. The cucumber seemed very delicious. However, the ucumber field was accross the river. It wondered how it could cross the river. It thought the way to get there. Then, it suddenly jumped cheerfully and shouted.

“Hey, the crocodiles, come out! Come on, guys. I have delicious food for you all!”

“The crocodiles, do you want fresh meat?” the mouse deer offered.

The leader of the crocodiles responded, “Hey, who’s shouting there? Who did annoy us just now?”

“Shut up, you, mouse deer. You annoyed us. It’s our sleeping time. Go away or we will eat you instead.” The crocodile said.

But, the mouse deer was still persistent to call the crocodile, “I am so sorry if I annoyed you, my friends. Please, listen to me. I have fresh meat for you.”

“You want to say that you bring yourself here to be our lunch? Hmm… you are so kind. You looked delicious. Fortunately, we haven’t had breakfast.” The crocodile responded.

“Oh it’s not like you thought, my friend. I already prepared some foods. I need to cross this river to share it with you. I put it there. Besides, I need to count all of you to share it.” The mouse deer said.

“Wow. That’s great, my tiny friend. So, what should we do for you?” The crocodile said.

The mouse deer told the crocodiles how to do it, “It’s easy. You only need to make a row until I can cross the river. I will be walking on your back and counting.”

Without thinking any longer, the crocodiles did what the mouse deer told. The crocodiles made a row until the other side of the river. They looked like a bridge on the river.

The mouse deer counted until the last crocodile and it was successful to cross the river. It laughed and said something in its mind “Hahaha. It’s so easy. Easier than I thought.”

When it arrived at the other river side, it said something to the crocodiles which already helped it.

“Hey, the crocodiles, actually there’s no food that I want to share with you. Don’t you see that there’s no food here and I don’t bring any food in my hand? I only want to cross the river and I need a bridge to pass by. I would like to say thanks for you because you already helped me, my friends. I am sorry if you feel annoyed.”

The crocodiles were shocked and disappointed because the mouse deer tricked them.

“Oh, it’s bad. You are so naughty mouse deer. You tricked us. Watch out. We will eat you if we meet you again.”