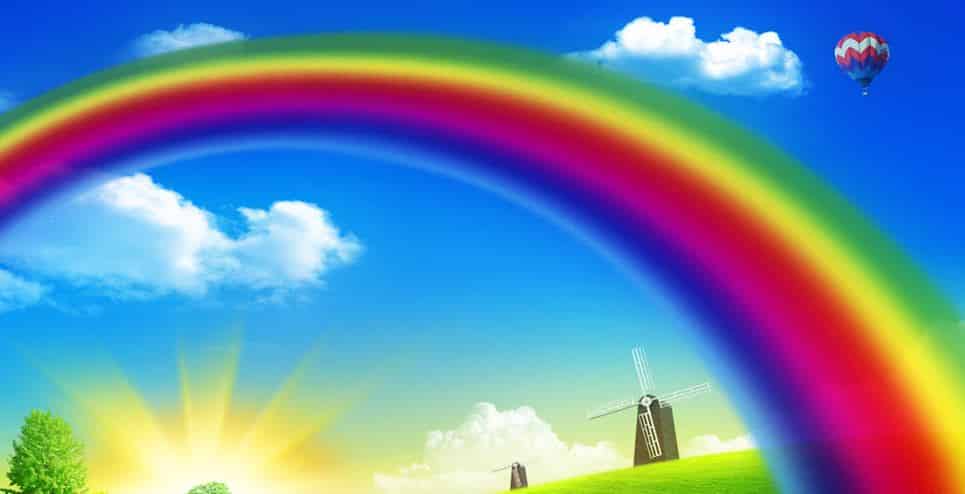 The bending of light

The basic process of the process of the rainbow is refraction. Deflected light – or rather, a change of direction – when traveling from one medium to another. This occurs because light travels at different speeds in different media.

A beam of light changes when it enters the glass prism. This is a simplification, but we can predict it like this: One side of light waves slow down before the other, so that the light beam is changing direction at the boundary between air and glass (some light is totally reflected on the surface of the prism, but the vast majority get through the prism ). Then, the light beam will turn directions again when exiting the prism, because one side of the light waves move faster before others.

In addition to the overall bend light, a prism separates white light into its component colors. Different colors of light have different frequencies, which causes them to propagate at different speeds as they move through a medium.

A color that move more slowly in the glass will turn more sharply when passing from air to glass, because the speed difference is greater. A color that move faster in the glass will not be much slowed down, so it will be less sharp bend. In this way, the colors that make up white light is separated by the frequency when they pass through the glass. If the glass bend the light twice, as in a prism, you can see the colors separated more easily. This is called dispersion.

Process of the Rainbow: A glass prism separates white light into its component colors.

Raindrop can refract and scatter light with the same basic way as a prism. Under the right conditions, this refraction form the rainbow.

A raindrop has a different shape and consistency of a glass prism, but it affects the light in the same way. When white sunlight break through the collection of rainfall at an angle low enough, you can see the color components of red, orange, yellow, green, blue, indigo and violet – a rainbow. For simplicity, we will only see red and purple, the color of the light at the end of the visible light spectrum.

Process of the Rainbow: When the sun is streaming through the raindrops.

When white light passes from air into a drop of water, the color components of light slows to a different pace depending on their frequency. Violet light to turn at a relatively sharp angle when it enters the raindrop. On the right side of the droplet, some light penetrates back into the air, and the rest is reflected back. Some of the reflected light is passing from the left side of droplets, turning as it moves into the air again.

Process of the Rainbow: We only see one color of every drop of rain.

When raindrops A disperses light, only red light in the right corner that bounces right toward our eyes. Other color lights out or is bouncing from the lower angle, so that the reflection is not right direction toward our eyes. Sunlight will bypass all the raindrops around it in the same manner as described above, so that they all will reflect the red light to the observer.

Raindrops B is much lower in the sky, so it does not reflect light red to our eyes. In the end, the purple light out at a right angle to bounce toward our eyes. All the drops of rain water around the raindrops and reflect light in the same way. Raindrops between A and B all reflect different colors of light toward the eye of the observer, so that the observer sees the full spectrum of colors. If you rise above the rain, you will see the rainbow as a full circle, because the light will bounce back from all corners where you are. On the ground, we see a rainbow that looks out over the horizon.

Sometimes you can see a double rainbow – the rainbow with sharp color and a faint rainbow on it. Dimmer rainbow is produced in the same manner as a rainbow with sharp colors, but the light is not reflected at all in the drops of rain, but rather reflected twice. As a result of this double reflection, the light out of the raindrop at a different angle, so we see the rainbow higher. If you look carefully, you will notice that the colors in the second rainbow will be in reverse order of the primary rainbow.