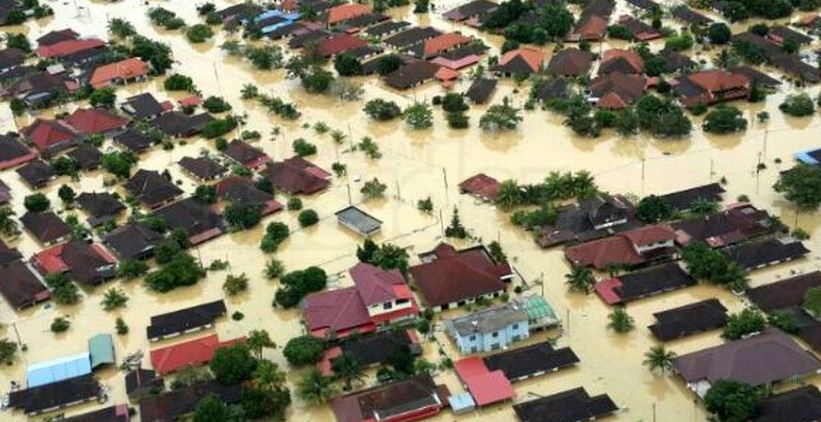 Floods are natural disasters that frequently occur in many cities in different scales where the water with an excessive number are on the normally dry land. According KBBI or Indonesian dictionary, the definition of flooding was juicy and too heavy, sometimes overflowing. It can happen because the amount of water in lakes, rivers, or other water catchment area that exceeds the normal capacity due to the accumulation of rainwater or compression so that it spills.

When floods occur, a lot of people lose their properties. It even causes casualties. Therefore, it is good to know the cause of flooding in order to take appropriate steps to prevent floods. The first cause is deforestation wild. Illegal logging makes forests into barren one of the causes of flooding. This is because the roots of the tree has a function to absorb water. Therefore, if many trees are lost it will easily flood. The second cause is littering. This one cause of the flood is already familiar. Garbage dumped randomly that is disposed of in rivers or other waterways can clog the water flow so that it can overflow and cause flooding.

The third cause is settlement on the banks of rivers or streams. Settlements are established on the riverbanks of the river that results susceptible to silting. Siltation is happening in the river because of the habit of throwing garbage into the river as well as the state of the ground on either side of the building can be just collapsed and then close the river side. So that the river becomes narrower and prone to flooding. The fourth cause is lowland. The regions are located in lowland areas may cause flooding. It is because of flood water flowing from the upland to lowland so it can be at risk of flooding. The fifth cause is high rainfall. This cause of the flood is caused due to weather factors. If there is an area that has high rainfall and occurs protracted for a long time, it has a greater risk for flooding especially if it is located in the lowland.

The next cause of flood is drainage that is already changed. Drainage is already changed regardless of the environmental impact analysis especially in urban environments. Swamp or forest areas can help to prevent or reduce flooding, but it is used to build a mall or other building that damage the lining of the atmosphere and will easily be at risk of flooding The seventh cause of flood is the dam is breached. The dam that bursts is one of the causes of flooding in the area surrounding neighborhood that is less well-maintained and easily tampered preservation by using something that is not in place. The outcome may results in flash floods that are extremely detrimental. The eight cause is one of spatial management system. This cause of the flood can lead to water on which it is difficult to be absorbed and flow slowly.

The next cause of flood is tsunami. It is a type of flooding of seawater that is very large. Tsunami is a cause disastrous floods. Tsunamis generally occur due to shifting layers of the Earth’s plates. The high tsunami waves can easily sweep the areas around them to be able to cause much harm and loss of life. The last cause is land can no longer absorb water. Lands that are not able to absorb water can be due to several factors, one of them because there is no green land or vacant land. So that water is not absorbed into the ground, but directly into rivers, lakes, ditches, or other waterways. The water is contained in large quantities when they can not be accommodated by the waterway could stagnate and causes flooding.

Every natural disaster certainly causes losses and the impact on the affected areas, as well as floods. There are some impacts of the flooding, such as the spread of various seed-mouth disease, loss of possessions, agriculture, crops, or farms are damaged, inflicting many casualties in case of flash floods, and the public facilities, infrastructure and facilities become damaged. Moreover, floods may cause the rare of clen water, the number of tourists who come to the area will decrease, the restoration of the affected areas takes a long time, the high cost to build facilities and infrastructure are damaged by the floods, and there will be an increase in prices because the food becomes scarce.

However, there are some ways to cope with a flood, such as organizing local waterways such as rivers, lakes, etc. in accordance with its function, not throwing litter into lakes, rivers, ditches, not building a house or building in the bank of the river, performing the river dredging, the need of reforestation or forest green, and monitoring and warning system in case of disaster should be built in areas prone to flooding.