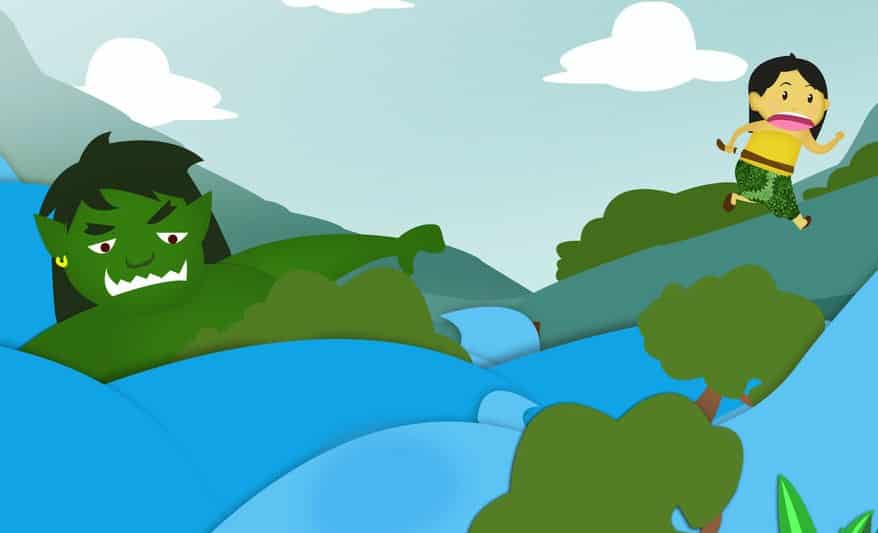 The Giant : Bad giant who wants to eat Timun Mas.

Once upon a time. In a village near the jungle lived a couple of old farmer. The lived very happy there, but they still wanted to have a child and it make them sad. Day by day they prayed to God to give them a child.

One day, a bad giant passed their home and listen to their pray.

Old Woman : Oh God. My husband and I have been live for many years with no child. But we are still patient to wait a child from you.

Old man : Please God. Let us be happy in the end of our life.

The Giant who hears the Old couple come to them.

The Giant : Hahahahahahaha. I can hear you old man.

Old woman : Please giant don’t kill us. We will give you everything.

The Giant : Don’t be scared, I will give you a chance to have a child in one condition. If your child have been 17 years old. you should give her to me. I want to eat her.

Old Woman : How you can give me a child?

Old man : We have pray for many years and nothing happen. How you can give us a child.

The Giant : I will give you this seed. Plant it in your field, then a cucumber palnt will grow. Pick up the cucumber and you will find a kid inside it. (give the seed)

Old Woman : (accept the seed) oh. Thank you giant. Thank you very much.

The giant : Remember. I will take her 17 years later. If you break your promise, I will eat you both. (leave the old couple farmer)

The Old farmer do as the giant said. The cucumber plant has a big cucumber. The old woman took it and open the cucumber carefully and she find a litte baby girl in it. They take care of the girl with all their love. They name her Timun Mas.

Old Woman : Look at our daughter. She is very smart, beautiful, and kind.

Old man : Yes, I will be very sad that we should give her to the giant.

Old Woman : we should think how to save her.

Old man : Of course, I will do everything for our Timun Mas.

When they are talking, the giant come.

The Giant : Hey old man. I come to take your daughter.

Old man : Yes, she still very small for you. We promise to give her when she is 17 years old.

The Giant : Ok. I will come two years later. Don’t try to save her or I will kill you and her.

All day the old couple look very sad because they can’t save their daughter. Until they heard about a hermit live in the jungle. just a few days before the giant comes, the old man come to see the hermit and bring 4 pack of thing.

Old Woman : What you bring my husband?

Old Man : The hermit said that these can help Timun Mas. Now we should tell Timun Mas so we can save her.

Old man : We will tell you a story. We can have you because the giant help us.

Old Woman : Now, the giant want to take you and eat you. We will make you run from here so you can live.

Timun Mas : How about you mom, dad. You will be hurt. If the giant want me, give me. It is important for me to see mother and father live.

Old Man : We will be ok my daughter.

Old woman : Here. Use this to protect yourself, This is 4 pack which contain cucumber seed, needle, salt, and shrimp paste.

Old man : You should use it when the giant near to you. you should run by tomorrow morning.

Timun Mas : Yes mother, father. I will do what you say. But promise me, mother and father will be ok. (hugh her parents) In the morning next day.

The Giant : Hey old man. Old Woman. Where is your daughter.

Old man : She is not here. She does not go home.

Old Woman : I will not give her to you.

The giant : You broke your promise old man. (Waves his hand and crush the old farmers house)

However, the giant can see Timun Mas run in the jungle. He runs to chase Timun Mas.

The Giant : Stop you Timun Mas. I will eat you.

Timun Mas : I will alive for my parents. (throw the cucumber seed).

Suddenly, the seed grow into a cucumber field that make the giant stops and eats a lot of cucumber. When the giant realise that Timun Mas has run away, he runs to chase her.

The giant : Where are you Timun Mas? (scream)

When The giant close to Timun Mas, Timun Mas throw the needle. Suddenly, the sharp thorn grow to obstruct the giant.

Timun Mas : I hope you stay there Giant.

The giant can get out of the thorn forest and chase Timun Mas. Then Timun Mas throw the shim paste to a large field divide her and the giant. When the giant walk in that field, suddenly the field turn into a live mud and swallow the giant.

Timun Mas : It is too late Giant, I have tell you not to chase me.

Now, you will die and I will be back to live together with my family.

Finally, The Giant swallow by the live mud and never come back. Timun Mas can live happily with her parents.