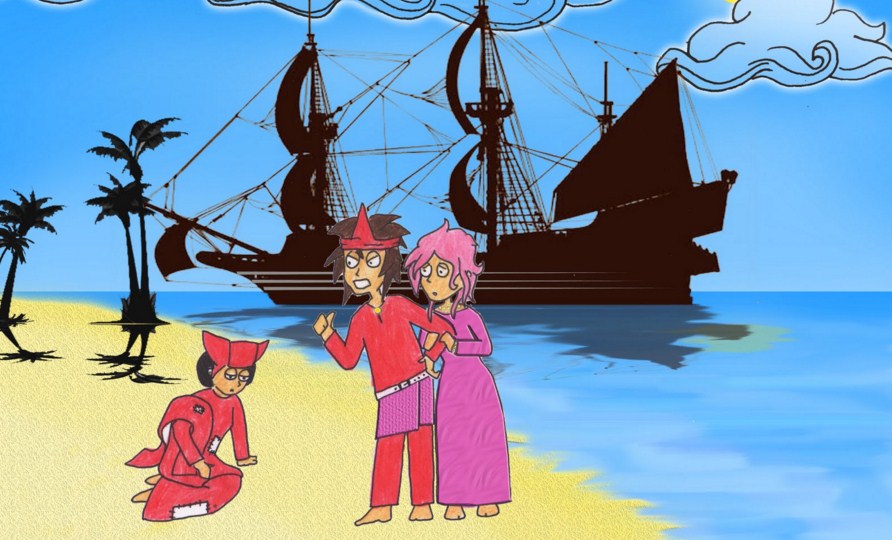 Once upon a time, a fisherman’s family lived near the beach area in Sumatra Island. The fisherman had a son, named Malin Kundang. The fisherman wandered somewhere because his family’s condition was poor. He would like to afford his family’s life better. He left his wife and his son. They lived in a bad hut.

After a year, the fisherman didn’t come back yet to his hometown. Because of that condition, his wife had to work. Malin was a smart boy but naughty. He often chased a rooster and hit it by using a broom. One day, Malin fell down when he chased the rooster. His arm was hurt. It left a scar on his arm. When he grew up, Malin Kundang felt pity toward his mother who worked hard for him. He thought that it was better to reach a better future by going to the other town. He hoped that he could be a rich man when he came back to his hometown. Then, Malin was interested in a ………nakhoda offer who had been a poor man but now he was rich.

Malin said his willingness to his mom. She didn’t agree with Malin’s decision. But, Malin tried to make her agree. At last, his mother let him go although she felt hard. Then, Malin packed all of his stuff and went to the harbour. His mother also followed him to say goodbye.

“My son, if you are successful and rich, please don’t forget me, your mother. Don’t forget your hometown. Come back soon.” His mother said with tears.

“I’ll be back soon, mom. Don’t worry. Keep praying for me and be healthy, mom. I will always miss you.” Malin said.

Malin got on the ship. His mom waved her hand and she cried. Malin learned many things when he was in the ship. He got many experiences. In the middle of the journey of the ship, a group of pirates attacked their ship and they took all of their belongings. Even, many people in the ship were killed. Fortunately, Malin hid in a small room and he was safe from the pirates.

After the pirates went away, Malin was alone in the ship and it went without clear direction. Then, the ship was stranded on an island. He walked in the island. He was found by people who lived there. They took care of Malin and treated him very well. They helped Malin because they were pity hearing his story. Time by time, Malin became rich. He worked very hard. Then, he got married with a girl from that island. She was very beautiful. She was the daughter of the richest man in that village.

“Is she your mother?” His wife asked.

“No. My mother is not like you. She is a beggar. Go away! Don’t block me.” Malin shouted.

His mother was so sad. She was angry with Malin. She put up her hands and prayed. She cursed Malin to be a stone. Then, a thunder appeared. At once, Malin and his wife became stones.