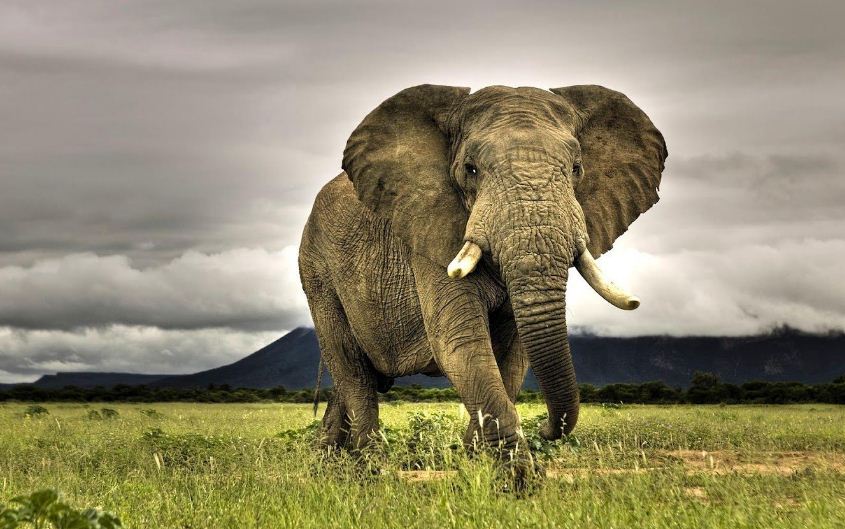 Elephants (Loxodonta) is a basic thoughest mammal in the world. African elephants and Asian elephants are the two surviving species of the remains of various groups of large mammals in prehistoric times. The fossil record shows that elephants have some distant relatives, namely rodentlike hyrax. In East Africa a lot of well-preserved fossil remains of elephants have previously helped scientists in researching the archaeological sites of prehistoric human.

Elephants are the largest living land mammal, one of the most impressive animals on earth. Of all the features in particular, the proboscis is most remarkable that serves as a nose, hand, extra foot, signaling device, a tool for gathering food, vacuum water, dust, tools for digging and a variety of other functions. Not only that, the long trunk also allows the elephants to reach food at an altitude of 23 feet. Elephant’s trunk is also capable of doing the twist and circular with a strong is used to destroy trees or fighting. African elephant’s trunk has two finger-like structures at the ends, compared with Asian elephants which have only one.

Ivory is another remarkable feature of the elephant. Ivory is an elongated incisors (elephants have no canine teeth); about a third of their total length lies hidden inside the skull. The largest ivory ever recorded weighed 214 pounds and 138 inches long. The size of ivory is not found on elephants in Africa today, as over the years poachers have taken animals with the largest tusks. Because tusk size is a characteristic that is not inherited, it is rare to find an elephant which has tusks weighing more than 100 pounds now. Both male and female African elephants have tusks, although in the Asian elephant species only males have tusks.

Size of African elephant ears over two times are higher than the Asian elephant and have different forms and are often described as similar to a map of Africa. Elephants use their ears to indicate a signal or a warning when there is danger or when they’re angry. Ear also serves to control body temperature elephant. With ear flaps on hot days, blood is circulated in various blood vessels that ear; return of blood to the head and body; and make the elephant’s body goes cold.

The soles of the feet of elephants are covered with thick pads that help maintain weight, prevent slipping and to muffle the sound that makes the elephant can run almost silently. Elephants usually have five toes on each foot nailed the front and four on each hind limb.

Elephants form small family groups consisting of older females as the leaders with three or four offspring along with their children. Elephant group (Herd) is not led by a male elephant because of the nature of the elephant bulls that prefer to live solitary (alone). Groups of female elephants are frequented by elephants adult males for mating. Some groups of elephants that inhabit the region are interrelated and know each other very well. When they meet at the watering hole and a hoof they will greet each other.

The social life of male and female elephants are very different. Female elephants spend their lives in a matrilineal family groups. Some of the group consists of more than ten members (including three pairs of mothers and children), are led by a matriarch who is usually the oldest female. The matriarch leads the group until she dies or if it no longer has enough energy to perform her duties. According to research at the zoo, when the matriarch dies, the content of corticosterone (a stress hormone) faecal increases sharply in the elephants that are still alive. When her job ends, the eldest daughter of the Matriarch will succeed, even if the matriarch’s sister is still alive. Older matriarch tends to be a more effective decision-maker.

The social life of a female elephant is not just limited to the small family unit. In the Amboseli National Park, Kenya, female elephants also interact with the family, clan, and other subpopulations. Family groups can mingle and create a bond with the other groups, thus forming a bonding group. Bonding group usually consists of two groups of families. In the dry season, families of elephants may get together and form a clan. The groups in this clan do not have a strong bond, but they retain their territories in dry season from another clan. Usually there are nine groups in the clan. The population of elephants in Amboseli is also divided into subpopulations “center” and “edges”.