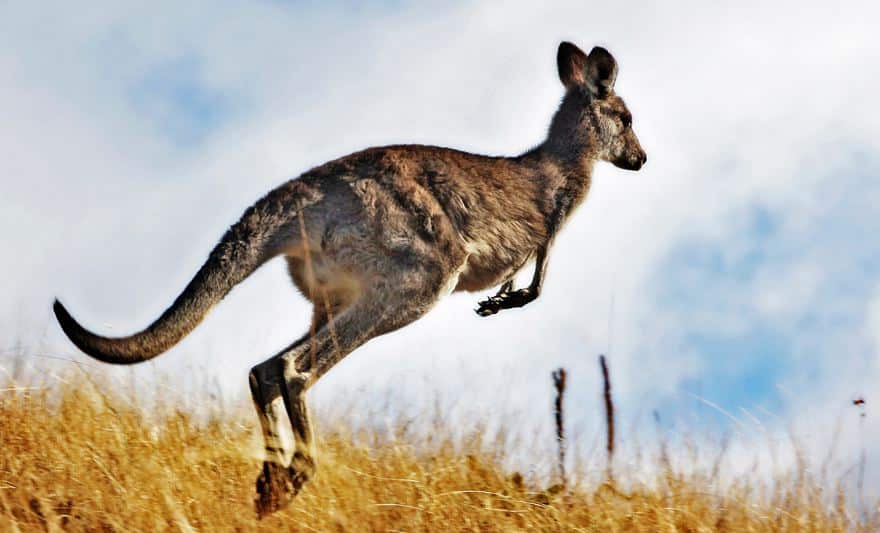 Kangaroos are native animals in Australia. These animals is in the group of marsupials. This is because the female kangaroos have pouches in the front of the stomach to keep its child. Kangaroos have a small, furry, and snouted head. Their biased ears are moving from front to back following the noise. This ability is helpful for them to keep away from harm, especially predators. Kangaroo’s size of hind legs are larger than front legs. These legs are used to jump and save itself from the enemy. The front legs are used to pull leaves or dig in the dirt looking for water. Kangaroo’s tail is strong and muscular. The tail serves as the support balance when kangaroo stands.

Kangaroo is a unique animal that moves by jumping. Kangaroos are able to jump at a speed of 20-25 km / h (slow category), 40-45 km / h (generally), and 70km / h (fast). Kangaroos are able to jump because it is supported by the structure of the legs, especially the soles of his feet are formed by thick muscle that also can be bounced. Beside moving, kangaroo can also run by stepping with its feet that are not flat on the ground, so it seems like a jump. If it is running like that, kangaroos need the help of the tail to wag to the left and to the right. Kangaroos can not walk backwards due to the structure of its body arched forward and muscular tail structure.

The digestive system of kangaroo consists of the digestive glands and digestive organs. Digestive gland consists of four pairs of salivary glands: Parathyroid, infaorbital, submaksilari, and sublingual. There is a gallbladder with bile duct and pancreatic lymph channels that is empty into the duodenum. Cecum (the cecum) is thin walled, has length approximately 50 cm, has a vermiformis appendix (appendix) that looks like a finger. While its digestive organ consists of the mouth, esophagus, ventriculus, duodenum, ileum, rectum, and anus.

Kidneys of kangaroo are shaped like beans on which kidney median space is called the renal pelvis associated with bladder via the ureters. Urethra from the bladder is functioned to take the urine out through the urinary tract. The dominant kangaroo has own separate channels, unlike other vertebrate animals which uses the cloaca. Kangaroos and other mammals have drains waste products through the anus, urine through the urethra and reproductive tract via the vagina and penis.

These grooves contain nasal bones turbinal winding that expand the surface olfactory. Roofed an epiglottis larynx contains the vocal cords. Two lungs respectively separate the pleural space. The active phase of the breathing inspiration is followed by depression (flattening) of the diaphragm and the elevation of the ribs (with a curved movement out).

In the reproductive system of male kangaroos, it is consisting of testis, epididymis, vas deferens, and penis. Vas deferens past the lateral and posterior to then join the urethra. The male kangaroos have seminal vesicles, resulting in a cycle of its spermatogenesis, sperm generated is not stored in advance in the sperm sac but is directly channeled. Kangaroos have wide epididimis channel width and testes. At the end of the kangaroo penis, it is found a branch where both branches are working to copulate. In a mating, the male kangaroos produce millions of sperm that will fertilize the female egg.

In the reproductive system of female kangaroos, the period of pregnancy in female kangaroo ranges from 18-38 days depending on the species. Th species of red kangaroo (Macropus rufus) experiences a period of gestation of about 33 days. Female kangaroos copulate when the baby in her pocket changes nipples, female kangaroo produces one egg which is fertilized by one sperm. Egg cells which are fertilized do not always directly develops, the eggs require a temperature minimum. Therefore, the egg in the womb of kangaroos will be able to grow in the rainy season. But if the kangaroo do the copulation during the rainy season, so the fertilized egg will be directly grown for 33 days. The reproductive system of kangaroos is very different from other animals. Kangaroo embryo passes through several stages of development outside the womb, which normally occur in the womb.