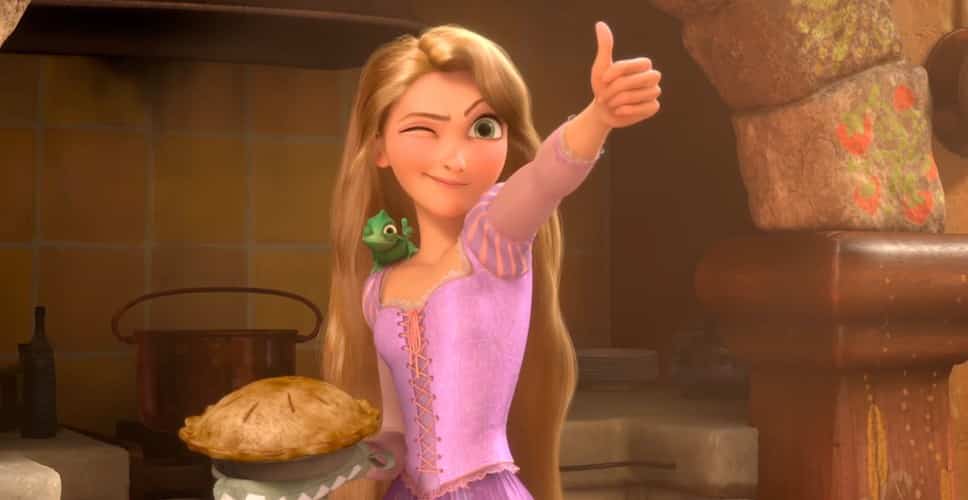 Rapunzel : The lost Princess. She has long golden hair with magic healing.

Witch Gothel : The witch who kidnaps Rapunzel when she was a baby.

The King and Queen: The parents of Rapunzel.

In a kingdom, the king and queen just have their daughter. They have a daughter and named her Rapunzel.

King : I will make a big lantern party to celebrate Rapunzel’s birth.

Queen : Look at her eyes, she is so beautiful.

While Queen and King prepare for the celebration, a witch who knows that the hair of Rapunzel has a healing power, plans to kidnap her. So The witch kidnaps Rapunzel, brings her into her hidden tower and grows her as her own daughter.

17 years later in a hidden tower.

Rapunzel : As you wish mother.

Gothel : Why you make it so late. I’m tired from a long way.

Rapunzel : Mother, it is almost my 18 years old birthday. Can I have a present?

Gothel : Sure. What do you want?

Gothel : (surprised) I’m sorry Rapunzel, but the world is a dangerous place for you. I don’t want anybody hurt you. Can you ask for another present?

Rapunzel : But, I really want to see it. I have draw there. Please mother.

Gothel : (angry) I don’t want to talk about it now. I’m tired Rapunzel. Tell me what you want tomorrow. Another present.

Rapunzel : (feeling so sorry) I will think about it mother. I’m sorry.

In the early morning before Gothel comes, A young thief who is chased by the kingdom soldiers see the tower and plans to hide there. Rapunzel is very surprised that she never sees anybody except her mother.

Eugene : (in the tower) finally I can get here.

Rapunzel hides in the wardrobe and suddenly hit Eugene with a pan. Eugene awakes and see himself bound in a chair.

Eugene : Who are you. What are you doing?

Rapunzel : You are dangerous.

Gothel : (from the outside of tower) “Rapunzel! Rapunzel! Let your hair down!”

Rapunzel : (hit Eugene with the frying pan and hide him in the wardrobe) Yes mom. I’ll take you up.

Gothel : (inside the tower) You have decide the present you want?

Rapunzel : yes mother, I think I want the ink for me to draw.

Gothel : It need a long way to get it Rapunzel.

Rapunzel : Then I can’t have anything for my birthday mother.

After Gothel leaving the tower. Rapunzel find a crown that Eugene steals from the kingdom. She tries to wear it and feel that she has a connection with the crown. Rapunzel take Eugene out of the wardrobe and make an agreement for his freedom. Rapunzel sees the symbol on the crown is the same as what she has drawn.

Rapunzel : I will let you free in one condition. You should bring me with you.

Eugene : You say that I should bring you. I don’t want to bring you anywhere.

Rapunzel : I will break your crown if you don’t bring me.

In the outside of tower.

Rapunzel : Owh . . I feel so free. My mother told me that it’s dangerous here. But I will prove that I can go myself.

Gothe realiz that Rapunzel has left the tower want to take her back. Eugene wants to save Rapunzel, so he beats all the robbers and chases Rapunzel.

Eugene : Rapunzel, are you ok?. Let down your hair. I will save you.

Gothel : Take him up. I will finish him.

When Eugene in the tower, Gothel suddenly stabs him and make him dying.

Rapunzel : What you have done.

Gothel : He is dangerous. It is better if he was die.

Eugene : I will make you free. (cut Rapunzel’s hair)

Suddenly Gothel become older and older that she change into ash because she can use Rapunzel healing power to keep her young. Rapunzel start to cries, when her tears come to Eugene’s cheek, it heals Eugene.

Rapunzel : I think I have loss you.

Eugene : Thank you for saving me.

Together they go to the palace to make sure whether Rapunzel is the lost princess or not.

Eugene : I heard that the princess has lost since she was a baby, and she was kidnapped by a witch.

Rapunzel : I have a feeling that I have connection with all of these. I draw the sun as the symbol of the kingdom.

Eugene : Let us see the King and tell your story.

Eugene and Rapunzel meet the King and Queen in the kingdom. The kind King say to the soldier to let Rapunzel and Eugene come in.

King : What do you want little girl?

Eugene : My King, I believe that she is the one you missed all these years, Your missing daughter, the lost princess.

Queen : How you can say so.

Eugene : She has been caged by old wicked witch in a hidden tower as long as her life.

Queen : (look closer to Rapunzel) Look at her eyes my King. I see our daughter eyes. I see my daughter.

King : Are you serious?

Queen : Yes, she is our Rapunzel.

King : Servant. Tell all the people, We will make a big party. My daughter is back. The lost princess is home.

Rapunzel has come back with the help of Eugene. Eugene and Rapunzel married a few years later. Rapunzel, the kind, brave and humble princess rules the kingdom well.