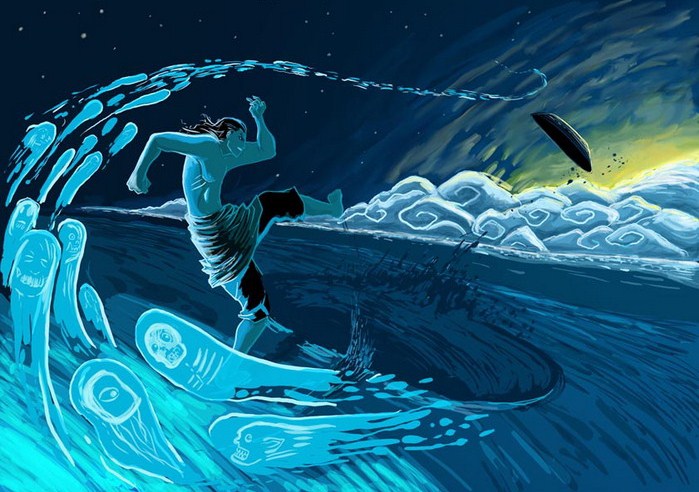 Long time ago in West Java, there’s a beautiful princess named Dayang Sumbi. When she grew up to be a lady, there was a war among many men because they wanted to get Dayang Sumbi as their wife. Dayang Sumbi felt uncomfortable with the condition and then asked her father to live alone and calm herself down. The King told her to bring Tumang, a dog which always accompanied the king in hunting, to protect her.

Dayang Sumbi went away from the palace and lived in a hut, on the edge of the forest. With her modest life, nobody recognized her as Dayang Sumbi. Everyday, she spent her time by knitting. One day, when she was sitting on the bench and knitting a cloth. She was sleepy and the knitting needle fell to the floor. Dayang Sumbi was lazy to take it. Then, she swore that she would marry whoever took the needle for her. Tumang took and gave it to Dayang Sumbi. To fulfill her swear which had been said, Dayang Sumbi married Tumang.

The King, her father, who knew that Dayang Sumbi married his dog felt embarrassed. Moreover, Dayang Sumbi was pregnant. He immediately took a decision. He sent Dayang Sumbi and Tumang to live in the forest. Nobody knew that Tuman was the incarnation of a Goddess. Tumang turned into handsome man in every full moon night.

Some months later, Dayang Sumbi gave a birth. Her child was a boy. She named him Sangkuriang. He had fine skin and thick black hair. Then, Sangkuriang grew up to be an agile boy. He was good at archery since he was a kid.

That boy loved hunting very much in the forest. Everytime he hunted, he was always accompanied by his lovely dog, Tumang. It was actually the bead of Goddess and also Sangkuriang’s father. However, Sangkuriang didn’t know it and her mom concealed it deliberately.

One day, Sangkuriang went to the forest to hunt as usual. Dayang Sumbi told him to get deer’s liver. When he arrived in the forest, he started to look for the prey. Sangkuriang looked at his prey but it ran away fast. He asked Tumang to chase it but Tumang refused to do it. Tumang sat and stared at Sangkuriang. He was angry with Tumang. He pointed Tumang with his arrow and shot it. He took Tumang’s liver and gave it to his mother, Dayang Sumbi.

Dayang Sumbi cooked the liver and she was happy. They ate it but in the middle of it Dayang Sumbi remembered Tumang. She asked where Tumang was. Sangkuriang couldn’t lie. He told her mom that Tuman died by his arrow and its liver had already been cooked and eaten by them. Dayang Sumbi was very angry because he killed his own father. She took a spoon and hit her son until he was wounded. Then, Sangkuriang went away from home.

However, Dayang Sumi regretted what she did to her son. She meditated and got a gift that was she would never be old. Meanwhile, Sangkuriang wandered somewhere. He learned to have great power to a teacher in the forest. Then, Sangkuriang could beat many creatures.

That night, Sangkuriang worked hard to make the ship. When the ship was done, he began to make the lake. Seeing the progress and the situation, Dayang Sumbi was panic and worried. Then, she made a trick to beat Sangkuriang. Dayang Sumbi put all of her knitting clothes on to the east and prayed to the God in order Sangkuriang failed in finishing the challenge. Several minutes later, the roosters said cook-a-doodle-do which was the morning sign. The creatures that helped him went away and he did everything alone. Sangkuriang thought that he would failed. He was angry and he kicked the ship that he made. Dayang Sumbi ran away and Sangkuriang chased her. But, he couldn’t get her.